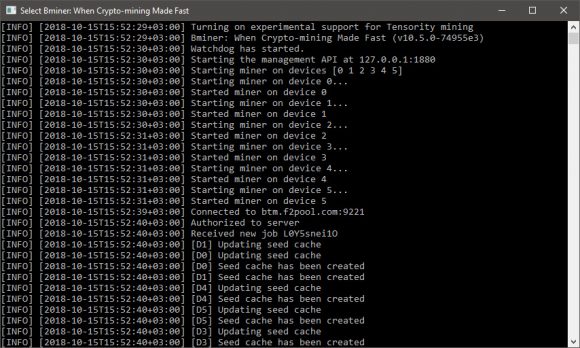 The latest Bminer 10.5.0 release has introduced another significant performance boost for Bytom (BTM) mining support using the Tensority algorithm, you can get up to 4500 H/s on GTX 1080 Ti or even more which is faster than the latest performance boost offered by the NebuTech BTMiner 10.0. Have in mind though that still not all of the BTM mining pools are supported by Bminer (like Antpool for example), so make sure you are on a compatible pool in order to get the optimal performance. We remind you that that Bminer is a closed source Nvidia GPU miner available for Linux and Windows in the form of pre-compiled binaries and that there is a 2% development fee for Bytom (BTM), Equihash and Zhash coins, 0.65% for Ethash and 1.3% for dual mining Ethash and Blake.

– To download and try the latest release of the Bminer 10.5.0 Nvidia GPU miner…