The Difference Between Litecoin and Bitcoin

The world of cryptocurrency has been taken over, in a majority, by Bitcoin and Ethereum. These two are what comes to everyone’s mind while mentioning virtual currency.

However, a lot has changed since 2008 and the invention of Bitcoin. More cryptocurrencies have started appearing, all with improvements over the original one.

One of them is the lesser-known offspring of Bitcoin — Litecoin. Which can process transactions much quicker than Bitcoin and there’s significantly more of them than Bitcoins.

So what is the difference between Litecoin and Bitcoin? Does Litecoin have a chance of outrunning the first cryptocurrency ever invented and becoming a number one?

Both Litecoin and Bitcoin are incredibly similar. Both are decentralised electronic currency, meaning they aren’t linked in any way to big banks and traditional banking system as we know it.

Litecoin’s code is open-source, meaning anyone can access it and is free to modify it. It also works on a shared peer-to-peer network, leaving behind a record of transactions that can be viewed by anyone who’s a member of the system.

While traditional currency supplies always fluctuate, e.g. US Dollars or Euro, both Bitcoin and Litecoin will reach a finite and the amount won’t increase.

Circulation of Bitcoin will be capped at 21 mln and Litecoin at 84 mln.

Litecoin was first introduced in 2011 by a former Google employee — Charlie Lee — via an open-source platform GitHub. Lee has recently left Coinbase, one of the most popular Bitcoin wallets.

The new cryptocurrency is often compared to what silver is to gold. In this sense, Litecoin is like silver to Bitcoin’s gold. It’s trading at less than Bitcoin, but there’s more of it.

Above all, Litecoin wasn’t supposed to replace Bitcoin but rather compliment it and offer an alternative.

Both Litecoin and Bitcoin are built on blockchain technology, but one of the crucial differences is how Litecoin is secured.
Litecoin uses a ‘scrypt’ for computing the proof-of-work hashes.

It’s built into Litecoin and makes it incredibly hard to replicate or steal. The technology requires a huge amount of memory to infiltrate, which results in a far too expensive process to virtually counterfeit.

What Is Litecoin Mining

Just like Bitcoin — Litecoin is generated by mining. For miners and enthusiasts though, Litecoin holds different proof-of-work algorithm.

Bitcoin uses a hashing algorithm, which involves calculations that can be accelerated in the mining process. Bitcoin mining also requires a raw processing power. Hence you might be familiar with pictures of large databases, full of computers and cables.

Thus, if you have enough computer power, you can quickly solve the transactions and generate new Bitcoins.

Litecoin, on the other hand, uses the above mentioned scrypt algorithm, otherwise known as s-crypt or script. It’s more memory intensive and requires not only the raw power but also computer memory to confirm transactions.

Scrypt incorporates the original Bitcoin algorithm, but it uses both the computer power and memory for mining.

What does it mean?

In the early stages of Bitcoin, everyone was able to mine transactions using regular computers (CPUs), gradually improving to more powerful gaming computers (GPUs).

By nature, the competition in cryptocurrency kept on rising. Hence there was a need for new, more profitable way of mining.

The only lucrative way of mining, accounting for electricity and mining equipment, is through the use of Application Specific Integrated Circuit (ASIC). These are expensive machines, built specifically for mining and won’t be able to be used to anything else.

As you can imagine, only a few could afford ASICs. Hence long term mining would be limited to an exclusive circle. Mining with the use of ASICs in counter-meaning in a decentralised world of cryptocurrency. It leads to a less decentralised network, which becomes worrisome.

And this is precisely what Lee wanted to avoid — he desired to make Litecoin a cryptocurrency that would be available to anyone.

Therefore he created Litecoin with a more memory intensive mining algorithm, making it less efficient for ASICs and more accessible to everyone.

The Difference Between Litecoin and Bitcoin 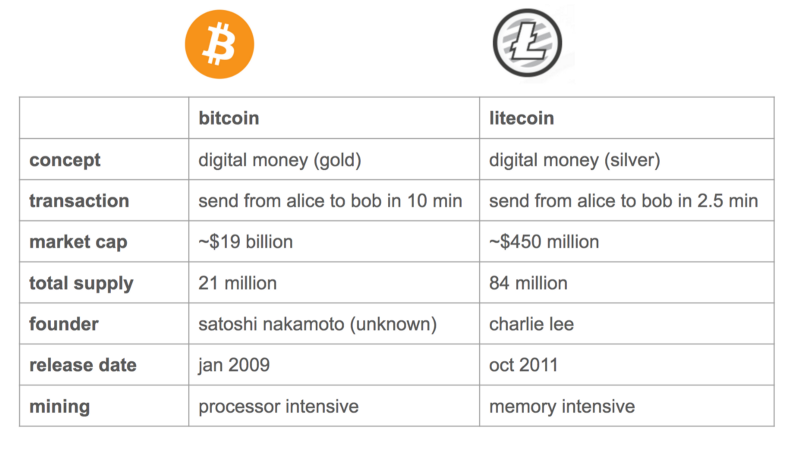 One of the most significant differences between these two currencies is the algorithm mentioned above and the way they’re mined.

It’s important to remember that the cryptocurrency transactions are instant — it’s the confirmation of them that requires time.

#1 Litecoin can handle a higher volume of transactions due to its faster block generation. For Bitcoin to match this, it would require a significant update in a code that everyone is using on the Bitcoin network.

#2 The higher volume of transactions means that Litecoin blockchain is larger than Bitcoins, with more orphaned blocks.

#3 The faster block time reduces the risk of cyber attacks, especially the threat of double spending.

#4 It encourages business to accept Litecoin as they don’t have to wait as long to confirm the transaction. If one Bitcoin transaction takes 10mins to approve, in the meantime there can be four Litecoin transactions confirmed.

How to Buy Litecoin

After few years of ups and downs, Litecoin has finally reached its all-time peak. The value of Litecoin increased by 1,000% in the last 90 days alone and currently stands at over $60.

Depending on each exchange, you have a choice of different methods of payment — from a credit card to Skrill.

So how can you invest in Litecoin?

Step 1 — Get a Litecoin wallet

Just like with Bitcoin — before you start investing, you should first get a wallet to store your future Litecoins. Some of the most popular wallets online are Exodus or Jaxx. If you’re looking for more security, you have a choice of hardware wallets like TREZOR or Ledger.

This is where it can get a bit tricky. One of the most significant issues with buying Litecoins is the lack of cryptocurrency exchanges that trade it.

If you want to invest in Bitcoin, all you have to do is go to the exchange and trade it with your USD or EUR. However, if you ‘re going to buy Litecoin, most exchanges trade it for Bitcoin.

So one of the most straightforward options is to buy Bitcoins and then exchange them to Litecoins on an exchange, e.g. Poloniex or ShapeShift.

Coinbase — you can buy up to $500 worth of Litecoins using your credit card; if you verify your identity, the limit goes higher

BitPanda — it’s probably one of the best exchanges for Europeans as it’s based in Austria. Hence you can trade in EUR; trading requires identity verification, and the buying limit is 600 Euro.

Step 3 — Buy Litecoins and withdraw it from your wallet

Once you decide on an exchange, open an account and buy Litecoins. Never leave coins in an exchange, and you risk losing them if the exchange gets hacked or shuts down.

Make sure you withdraw them to your wallet!

The Future of Litecoin

One crucial factor of Litecoin is that we are all aware of the Litecoin’s vision. Unlike the founder of Bitcoin (Satoshi Nakamoto), Charlie Lee is publicly known and heavily involved in the cryptocurrency community as well as the development of Litecoin.

At some point, Bitcoin might require more direction and leadership of someone who could take it to the next level and upgrade.

Very recently, in May 2017, Lee supported adding an upgrade to Litecoin — Segregated Witness (SegWit). It’s a transaction data format that requires less storage space, hence allows for more transaction and records to be stored in.

Litecoin itself doesn’t have problems with space, but the SegWig upgrade will allow adding more innovations like Lightning Network (LN).

Adding LN to the existing technology will quickly settle the transactions, meaning not all of them would have to go through public ledger.

What’s interesting is that the SegWit upgrade applies to both Bitcoin and Litecoin. However, Bitcoin requires a 95% support from the network to introduce an update, while Litecoin only asks for 75%.

There is an existing bridge between Bitcoin and Litecoin, but the implementation of the LN will allow trading both BTC and LTC instantaneously and without a risk.

Even if a merchant doesn’t accept Litecoin, and you only have in your wallet LTC, you can send the money, and they will be instantly converted to BTC.

Which Is Better: Litecoin or Bitcoin? 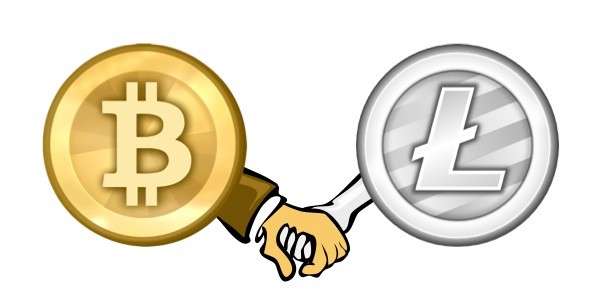 Until recently, Litecoin was just a shadow of Bitcoin, and nobody was thinking about it seriously.

But there’s one significant benefit of having a vocal leader — it encourages a technological progress within the network and offers a guidance during a major disagreement. It also indicates more trust and security.

Much of Litecoin’s advancements came from its founder, and he’s still a pushing force behind its growth. He’s very clear on wanting to take a turn in Litecoin existence and perhaps even outrun Bitcoin.

Bitcoin, on the other hand, is much slower when it comes to implementing new technologies. With Nakamoto never been identified as a real person, the network will always carry a certain negative aura.

And it’s in our nature to always turn into innovations that have a more comprehensive safety net.

Whether Litecoin will reach the sky-high price of Bitcoin, it’s questionable. Probably not in the foreseeable future. But with Bitcoin’s capacity decreasing — that might turn around in the future.

What is Litecoin in a nutshell?

Quite possibly the future of cryptocurrency and Bitcoin’s biggest contender. However, let’s not forget that Litecoin already has its contender — Ripple — and will have to step up the game not to lose on outdated technology.

If you’re interested in cryptocurrency and investing — stay on your toes — Charlie Lee definitely won’t drop Litecoin’s ball and you don’t want to miss that and Litecoin becoming an increasingly good investment.