Remembrance Day ceremonies on Parliament Hill in Ottawa, and at city halls, places of worship and military bases across Canada today are commemorating the end of the First World War a century ago.

Defence Minister Harjit Sajjan headed the ceremony, which began around 10:55 a.m. in sub-zero temperatures, as Prime Minister Justin Trudeau is in Paris on Sunday for events with other world leaders.

Sajjan arrived at the National War Memorial along with Gov. Gen. Julie Payette, who recently returned from Belgium, where she attended additional commemorative events.

Among those Payette greeted Sunday as the ceremony got underway was Winnipeg resident Anita Cenerini, who was named as the 2018 National Silver Cross mother, representing all military mothers who have lost a child to war. Cenerini fought for her son, Pte. Thomas Welch, to receive full military honours after his suicide. This is the first time the legion has chosen a mother who lost a child to suicide for the year-long designation. After serving in Afghanistan in 2003, the 22-year-old ended his life on May 8, 2004, at the army base in Petawawa, Ont.

At 11 a.m. Sunday, a sombre silence was broken by the beginning of a 21-gun salute and the deep tolling of a bell marking the solemn occasion. A flyover of five CF-18 Hornet aircraft from Cold Lake, Alta., also soared over the crowd at the National War Memorial in a “missing man” formation. The crowd paused at 11 a.m. to reflect on the sacrifices of Canadians who gave their lives in conflict around the world.

During the First World War, more than 66,000 Canadians died on the battlefields of Europe and more than 45,000 lost their lives during the Second World War. The Remembrance Day ceremonies acknowledge the contributions of all Canadians who have served and are still serving today.

As the Ottawa Children’s Choice sang In Flanders Field, wreaths were laid at the foot of the war memorial to remember the fallen. Payette put down the first wreath, followed by Cenerini on behalf of “The Mothers of Canada,” then Sajjan on behalf of the government, as well as others representing various federal departments, and even one representing the young people of Canada and another on behalf of Indigenous people.

In an interview before the ceremony began, Sajjan told CBC’s Hannah Thibedeau that this is a “very special Remembrance Day” because of the 100th anniversary of the signing of the armistice, ending the so-called Great War.

“We as a nation have been defined by it in many different ways,” said Canada’s defence minister, a Canadian Armed Forces veteran. 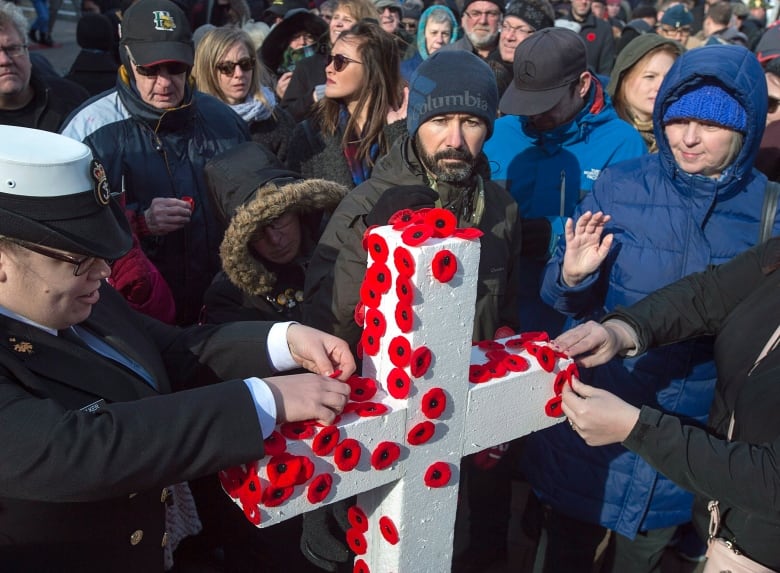 Poppies are pinned to a cross at Remembrance Day ceremonies at the Grand Parade in Halifax on Sunday, one of the many events across Canada. (Andrew Vaughan/Canadian Press)

“Even today our men and women in Armed Forces are deployed all over the world. And let’s not forget the families as well who serve alongside them.”

“World War I was a consequence where peace was not found … when we look at the work they do, we’re proud of the resilience in not only reducing conflict, but also preventing it.”

In a statement Sunday from the Prime Minister’s Office, Trudeau emphasized the role Canadians played in the First World War.

“One hundred years ago today, the Armistice between Germany and the Allies ended the First World War. As we commemorate the 100th anniversary of the armistice, we also mark Canada’s Hundred Days,” his statement says, in part.

“During the ‘100 Days Offensive,’ Canadians spearheaded attacks that overcame the last lines of German defences and paved the way to final victory. These soldiers were the face and strength of a young country that sacrificed beyond measure and never faltered in its duty.”

Trudeau also encouraged people in Canada to take time out at 11 a.m. for two minutes of silence, to “remember every Canadian who has sacrificed their future for generations beyond their own. We stand today, free and at peace, because of them. 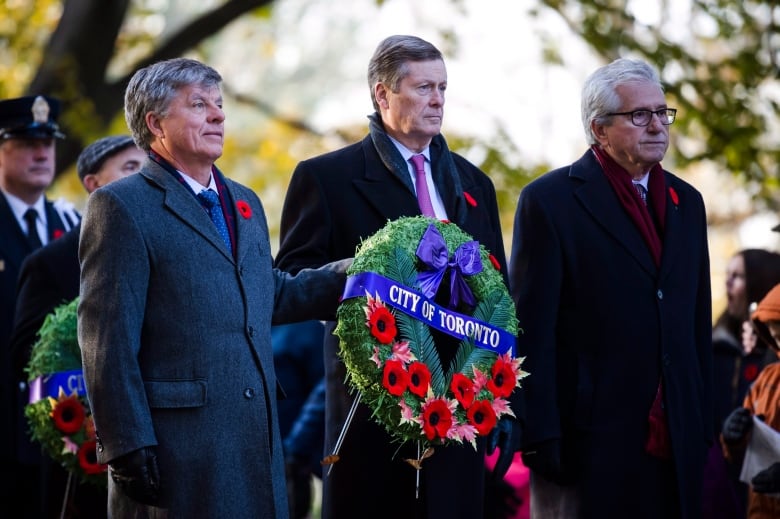 Mayor John Tory participates in a wreath ceremony during the sunrise Remembrance Day service at Prospect Ceremony in Toronto on Sunday. (Canadian Press)

In Toronto, among the events across the city, there will be a military parade through the downtown streets, with the primary ceremony set for Old City Hall starting at 10:45 a.m. ET, with Mayor John Tory in attendance.

Premier Doug Ford hosted Ontario’s official Queen’s Park Remembrance Day ceremony in Toronto, where he encouraged Canadians to remember soldiers past and present as they reflect on the centennial anniversary.

After a ceremony that saw as many as 500 troops march towards the Ontario Legislature while John McCrae’s poem In
Flanders Fields was read aloud, Ford told the crowd that “Canadian heroes span every conflict and every generation.”

On the East Coast, ceremonies included ones in Nova Scotia, where crowds of people filled the square at Halifax’s Grand Parade. As the clock struck 11 a.m. AT, the gun on nearby Citadel Hill fired the first of 22 shots.

And in Prince Edward Island, hundreds gathered in Charlottetown to honour the fallen. The sombre crowd stood in near silence as it reflected on the battles that ended a century ago, and those that have come since.

Montreal’s main ceremony began at the Quebec Provincial Command at 10:30 a.m. ET, at Place du Canada. Quebec City’s event was set to start at the Plains of Abraham at 10:30 a.m. until about noon, with Premier Franç​ois Legault in attendance.

With files from The Canadian Press