The continuing, rippling impact of the Great War that ended 100 years ago isn’t difficult to see, if you know where to look. The demise of Three Arms, for example, began with an explosion — though no-one in the Newfoundland fishing town could hear it.

A young lieutenant from the community watched the blast bury one of his men on a blood-and-crater-filled battlefield in northern France. Instinctively, Stephen Norris ran to help — but a second shell would catch him, too.

“There were only three survivors,” read the dispatch from Lt. Norris’s commanding officer. “He was a most promising officer and I deeply regret his loss.”

In Newfoundland, that loss would be most profoundly felt by the fallen soldier’s father, James.

The merchant of Three Arms, he owned and ran the only store, the fish cannery and the flotilla of fishing schooners. James was the sole employer in the bustling community of 140 people.

Three Arms is seen circa 1900, when it was home to a thriving fishing and canning industry. (The Rooms, Provincial Archives of Newfoundland)

This poem was written in the early 1900s by a resident of Three Arms:

There is romance in the moonlight,

There is magic on the sea,

There is beauty in the starlight,

Three Arms is the place to be,

All in perfect harmony,

Seem to blend the Earth with Heaven,

And fill one with great ecstasy.

Yet everything in the town reminded James Norris of his now dead son, his heir, the one who would take over the businesses. And so, he left — gradually closing his businesses over a few years following his son’s death in 1916.

“That was the end of it,” Eric Moore, who grew up in the community, explains.

“When the Norris family left, the town started to fade. There wasn’t any point in anybody coming here.”

How the fate of a thriving Newfoundland town was sealed by the death of a single solder in the First World War. 0:57

Lt. Stephen Norris’s death happened nearly a decade before Moore was born. When Moore was young, the population had already started moving away.

Moore’s own family was the last to leave in the 1940s. Today, at the age of 93, he’s one of a handful of people alive who ever lived in Three Arms.

Since then, nature has been slowly taking back the landscape.

“It’s kind of sad now when you see it compared to when it was alive,” Moore said on a recent visit to Three Arms by boat with a CBC News crew. “It’s dead now.”

With the aid of a walker and a number of friends, Moore climbed a hill, nearly breathless, to see the grave marker installed for Stephen Norris (like so many other soldiers killed in 1916, his body was never found). Moore paused where the church once stood, now a pile of rotting wood. 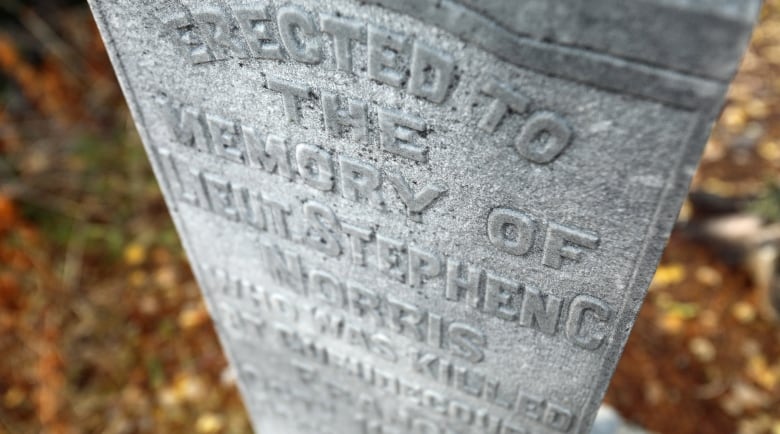 The monument in Three Arms to Lt. Stephen Norris. Killed on a First World War battlefield far from home, his body was never found. (David Common/CBC)

There is no sign at all of the large Norris family cannery on the shoreline, where schooners would deposit rich harvests of cod.

The foundations of a few homes are still visible through the long grass. Next to one is a square depression in the earth, at one time a vegetable garden.

“It’s almost like a living museum,” says Nancy Verges, a resident of nearby Harry’s Harbour. She grew up visiting Three Arms, which is now only accessible by boat. 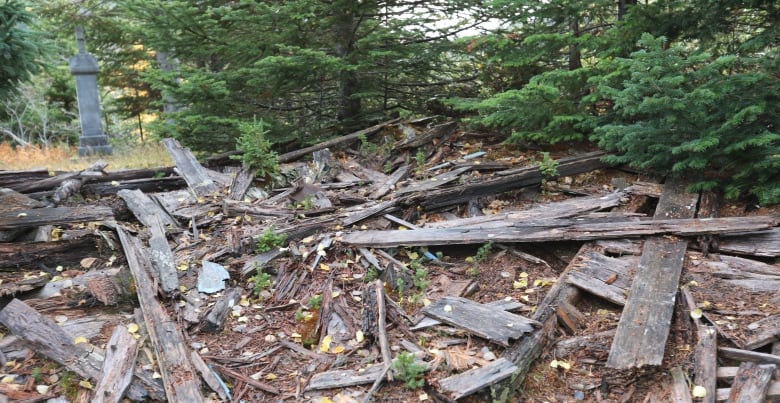 First World War battles claimed thousands of men from Newfoundland and across Canada, permanently altering the future of hundreds of towns. Many saw half their population go to war and never return — or return with physical and psychological wounds so fierce, they could no longer do the type of work they’d done before. Some communities would eventually shutter.

Three Arms, though, is somewhat unusual. Its life was so intertwined with that of one man, Lt. Norris, that its death was the direct result of his.

“It’s quite something to think about, how the loss of one individual can change the landscape here 100 years on,” says Maureen Peters, curator of a First World War exhibit at the The Rooms in St. John’s, part museum and part provincial archive.

“You see the echo of history.”

Some homes and surrounding buildings on the waterfront in Three Arms, circa 1900. (The Rooms, Provincial Archives of Newfoundland)

The same site, seen in 2018. Someone has built a small cabin on the foundations of one of the original homes, but the town’s buildings are all gone and nature has reclaimed the shoreline. (David Common/CBC)

The impact of a war long over still ripples through the history of the area — as it does across Canada — and conflict continues to change lives far from the battle lines.

Nancy Verges need only think of her husband. Now retired, he served 25 years in the Canadian Army, including a particularly violence-filled tour in Afghanistan.

“I can see the change in him,” Verges says. “It just carries on through the years. What happened back then [in the First World War] is still happening now. It’s still war. It’s still having effects.”

Nancy Verges, a resident of nearby Harry’s Harbour, grew up visiting the abandoned site of Three Arms. Behind her is the piece of shoreline where the Norris fish cannery used to stand. (David Common/CBC)

Waving from the hill where the brightly painted Norris family home once stood, Verges watches as Eric Moore wades back into the water in rubber boots, his aging body struggling to get back into the boat. He waves back.

It will likely be his last trip home.

The boat engine, roaring to life, masks the tears of his final departure from a town erased by a battlefield death an ocean away. 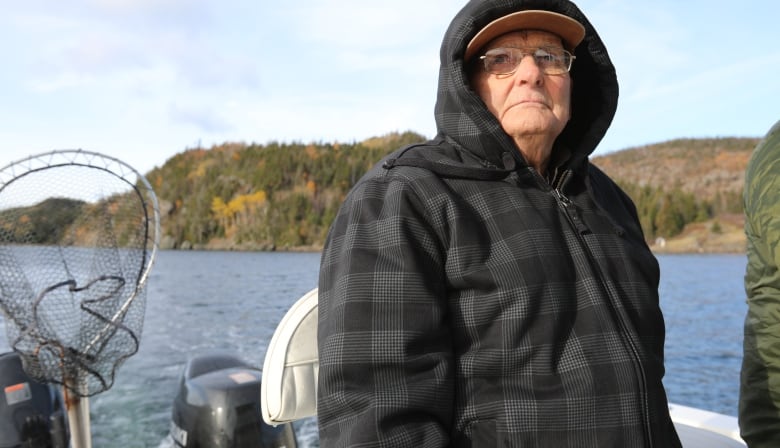