Could the 11XX Series Nvidia Cards Not Be As Great As We Think? 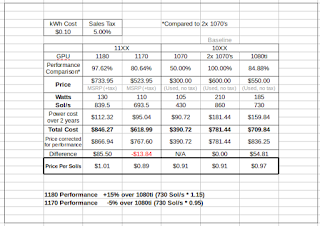 Sales in GPU’s have started to drop and the price has finally started to drop on new units but this comes for two reasons. Profit is way way down, the whole crypto market on a whole is way way down and until we see some recovery our profits will remain low. Secondly people waiting on the new 11 series cards instead of buying another 10 series cards.

Details of the next gen Nvidia cards have been vague to say the least will no real leaks coming and no dates, although people are speculating that it may not be long until we see them. The image above taken from this Reddit post and thanks to microcompass for allowing us to use it gives us some idea of why the 11 series cards may not be as great for mining as we may think.

The intial cost of the new cards will be the huge let down for us looking to mine, as microcompass says we would be better picking up 10 series cards at today’s prices and they will only get cheaper