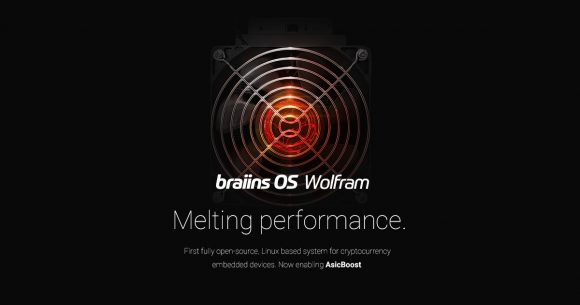 While we are still waiting Bitmain to release AsicBoost support for all of its Antminer S9 variations, Braiins OS Wolfram was made available from the Braiins team. This new release of the Braiins opensource OS for Bitcoin ASIC miners comes with support for all Antminer S9 variants and adds support for AsicBoost as well, it also works on DragonMint T1 (only the variant with Xilinx based control boards). Aside from AsicBoost support on S9 mining hardware, by using the Braiins OS Wolfram you also get the ability to change the clock frequency and voltage for the miners on per hashboard basis, so more tweaking options.

Braiins OS uses over (version-rolling) AsicBoost in accordance with BIP310. For Antminer S9, this is currently done using the bitstream provided by the manufacturer, but the goal is to switch to a custom open-source bitstream as soon as possible. All Antminer S9 models (S9, S9i, S9j) are supported, however, the amount of possible variations is rather high, so for this reason it is recommend to test an SD card image first on a single device and once you are confident that the firmware operates according to your expectations, you can apply factory transitional firmware images. Then you can start tweaking the voltage and frequency settings to utilize the extra power savings that you should get of about %13 thanks o the use of AsicBoost.